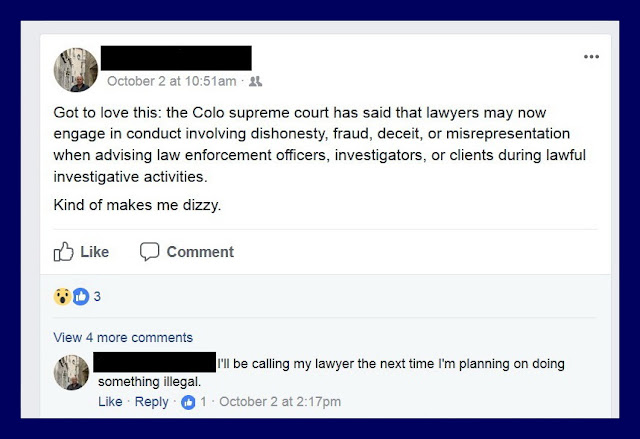 Colorado's Revised Rule 8.4(c) (or What I've Been Doing the Last 9 Months)

As I wrote last September, my blogging time has been reduced to nearly zero for over a year due to a number of projects I committed to.

Chief among these was chairing a subcommittee of the Colorado Bar Association’s Ethics Committee charged with drafting an opinion to provide guidance on the effect of the Colorado Supreme Court’s revised Rule 8.4(c), about which I have written extensively.  It was an incredibly time-consuming, but also an extremely rewarding task.  I essentially functioned as discussion leader, chief architect, and editor-in-chief for a group of the brightest, hardest-working members of the Ethics Committee I have had the pleasure know and honor to lead.

Writing this opinion was only half the battle — gaining approval from the entire Ethics Committee was the other half.  An earnest and vigorous debate in the Committee ensued over the wisdom of revised Rule 8.4(c), which now allows a Colorado attorney to "advise, direct, or supervise others, including clients, law enforcement officers, or investigators, who participate in lawful investigative activities."

The opinion ultimately passed, and has just been published on the Colorado Bar Association's Ethics website as Colo. Bar Ass'n Ethics Formal Op. 137, Advising, Directing, and Supervising Others in Lawful Investigative Activities That Involve Dishonesty, Fraud, Deceit, or Misrepresentation (May 2019).  You can read it here. 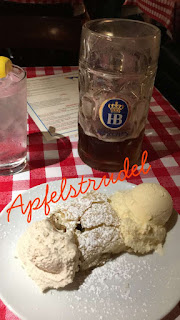 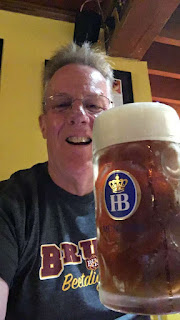 Also, my weakness for really, really good German food has gotten the best of me again.  After swearing off creating any new CLE programs this year so I could get back to blogging, my friends at NBI made me the one offer I can't seem to refuse: an all-expense paid return to the Winzer Stube German Restaurant in Hudson, Wisconsin this August for the low, low price of creating and recording a new national ethics webinar.  It should be a fun program as it is on one of my favorite topics.  It's called Attorney Ethics of E-mail and Texting: Essential Do's and Don'ts.  You can register for it here.


I've also been invited back to teach social media ethics at CBA-CLE's terrific two-and-a-half-day program, Successfully Launching and Running Your Own Practice.  The program, formerly known as Hanging Your Own Shingle (apparently that phrase is become anachronistic), is geared to law school graduates and others seeking to open their own law practice.  It includes a wealth of practical and legal information, as well as great marketing opportunities.  This year the program, now in its 19th year, will be held Thursday - Saturday, 8-10 August.  I'm speaking Friday afternoon.  CLE has not yet posted information about this year's edition, but you can get a good sense of it from the 2018 agenda, which is still up.

So, you know what I'll be doing this summer . . . writing, writing, creating PowerPoint presentations, and more writing.  In the meantime I continue to collect a lifetime of blog topic ideas.

Have a great summer, all!