Restatement of the Obvious 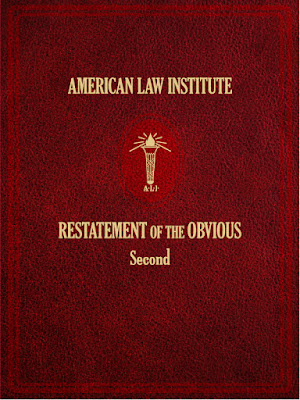 “A lawyer who serves notice upon an adverse party in compliance with the provisions of a contract for serving notices does not violate Rule 4.2.”  Restatement of the Obvious, § 101.

Every so often one encounters an argument so breathtakingly and originally imbecilic that no legal authority exists to refute it.  Whenever this occurred one of my former partners bemoaned that the American Law Institute had never published a Restatement of the Obvious, with one or two additional adjectives, which should not be repeated in a blog which strives for decorum, thrown in for good measure.  Such arguments are typically born of desperation or profound ignorance of the law.  While normally confined to substantive areas of the law, such as contracts or torts, the law of lawyering is not immune from this phenomenon.

In keeping with a tradition of providing lighter ethics fare in the summer, I offer now the first installment of an occasional feature: The Restatement of the Obvious.  Today’s installment is ripped from the pages of a recent successful, though not particularly challenging, defense of an attorney-client [1] to a Request for Investigation (“RFI”) filed with the Colorado Supreme Court’s Attorney Regulation Counsel (“OARC”).  The facts are these:

My client, who I shall call “Attorney X” (as in “X-asperated”), represented a landlord in commercial lease negotiations with a company (“Tenant”).  Tenant was represented in the negotiations by competent counsel, “Attorney TC” (for “Tenant’s Counsel”).

The lease provided that “[a]ll notices, which Landlord or Tenant may be required or may desire to serve on the other shall be in writing and shall be delivered . . .  addressed as set forth in the Basic Lease Provisions . . . .”  In turn, the Basic Lease Provisions provided that notices by the landlord must be served upon Tenant with a “simultaneous copy” to Attorney TC. 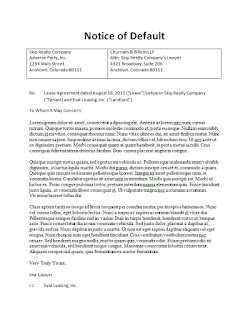 Approximately two years after its execution a dispute arose when Tenant failed to pay its share of the building’s operating expenses.  Tenant countered that the landlord had failed to provide certain required maintenance services.  The landlord declared a default and Attorney X send a Landlord’s Notice of Default letter to Tenant and to Attorney TC, as required by the lease.
building’s operating expenses.

The Notice of Default was utterly vanilla – it merely cited the terms of the lease of which Tenant was alleged to be in default, Tenant’s right to request an audit of its share of operating expenses, the landlord’s right to recover interest on unpaid rent, the amount claimed due and owing on the date of the Notice, and invited Tenant to invoke its right to conduct a formal audit.  Nothing more – no threats of litigation or otherwise, no offers of settlement.

In response to the Notice of Default, Complainant, Tenant’s President, filed an “Ethics Complaint,” more formally known as a Request for Investigation, with OARC.  Complainant’s letter to OARC stated in part:

I find it quite concerning that [Attorney X] knew at the time, [sic] that I was represented by [Attorney TC], (as evidenced by the [Notice of Default] letter co-addressed to [Attorney TC]), and still he had the temerity to send both [Attorney TC] and I [sic] the default letter simultaneously. 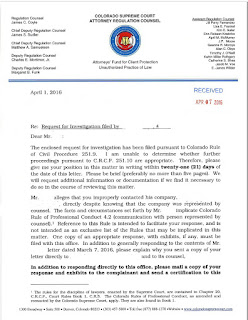 OARC notified Attorney X that a Request for Investigation had been made alleging that Attorney X had “improperly contacted [Complainant’s] company directly despite knowing that the company was represented by counsel.  The facts and circumstances set forth by [Complainant] implicate Colorado Rule of Professional Conduct 4.2 (communication with person represented by counsel).”  Attorney X was directed to respond within twenty-one days explaining why he sent a letter directly to Tenant and Attorney TC.


Whatever else lawyers may forget from their study of “Legal Profession,” Rule 4.2 seems to be the lesson that sticks.  Colorado has adopted the ABA Model Rule verbatim:

In representing a client, a lawyer shall not communicate about the subject of the representation with a person the lawyer knows to be represented by another lawyer in the matter, unless the lawyer has the consent of the other lawyer or is authorized to do so by law or a court order.
Colo. RPC 4.2 (Emphasis added).  The inapplicability of Rule 4.2 here is patent:


First, the lease both authorized and required notices of default to be served upon Tenant “with a simultaneous copy to” Attorney TC.  The notice provision, negotiated by Attorney TC, constituted both a lease requirement and consent of Tenant’s counsel to this manner of providing notice.  Accordingly, the “consent of the other lawyer” to service of the Notice of Default on Tenant was implicit, if not express, under the terms of the lease.

Further, twelve days after the Notice of Default was mailed, Attorney X received a letter from Attorney TNC (for “Tenant’s New Counsel”), establishing that Tenant was not represented by Attorney TC in connection with lease dispute.  Having had no contact with Attorney TC in connection with the lease in over a year, Attorney X did not “know” that Tenant was “represented by another lawyer in the matter,” i.e., the lease dispute, a condition to the applicability of Rule 4.2.  See Colo. RPC 1.0 (f) (“[K]nows “denotes actual knowledge of the fact in question.”)  Thus, even if one could credibly argue that the lease terms only authorized the landlord, and not its counsel, to draft and serve notices of default, Rule 4.2 was inapplicable.


Having been apprised all the circumstances, OARC took no further action, concluding in a letter to Complainant:

[Attorney X] notes in response . . . that the [Notice of Default] was sent directly to [Tenant] with a copy to [Attorney TC] because the underlying lease required such notice.  To the extent the lease authorized notice in this form, the contact cannot be found to a Rule violation.
Further, [Attorney X] denies that at the time [the Notice of Default was sent] he knew that you were represented by [Attorney TC].  [Attorney X] notes that another lawyer, [Attorney TNC], notified him that he was representing [Tenant] with regard to the lease dispute, and subsequent to such notification all communication has been through [Attorney TNC].
Contracts often include a provision prescribing the manner in which notices are to be given.  Such provisions routinely state that notice must be simultaneously given to a party’s counsel.  Some also include a mechanism for changing the individual and/or address to which notice is to be given.  However, I have never seen a notice provision that expressly stated, or felt the need to state, that a required notice could be given either by a party or its attorney.  Perhaps in the absence of the Restatement of the Obvious, they should.

The terms of the lease in this case did not expressly provide that the Notice of Default could be served by landlord’s counsel.  However, a construction of Rule 4.2 which would require a contract to expressly include such a provision would be ludicrous.  Taken to its illogical conclusion, such a construction would also prohibit a party from receiving assistance of counsel in drafting a contractually required notice, since such assistance would be a violation of Colo. RPC 8.4(a), which prohibits circumventing the Rules of Professional Conduct “through the acts of another.”  Here, Attorney TC, if not Tenant, understood that notices of default are drafted by lawyers, not their clients, and consented in advance to this manner of service.  While a Restatement of the Obvious would be useful in such situations, let us be thankful it was not needed.


[1] My client graciously consented to disclosing the facts of his case in the interest of advancing ethics education.  See Colo. RPC 1.6(a).